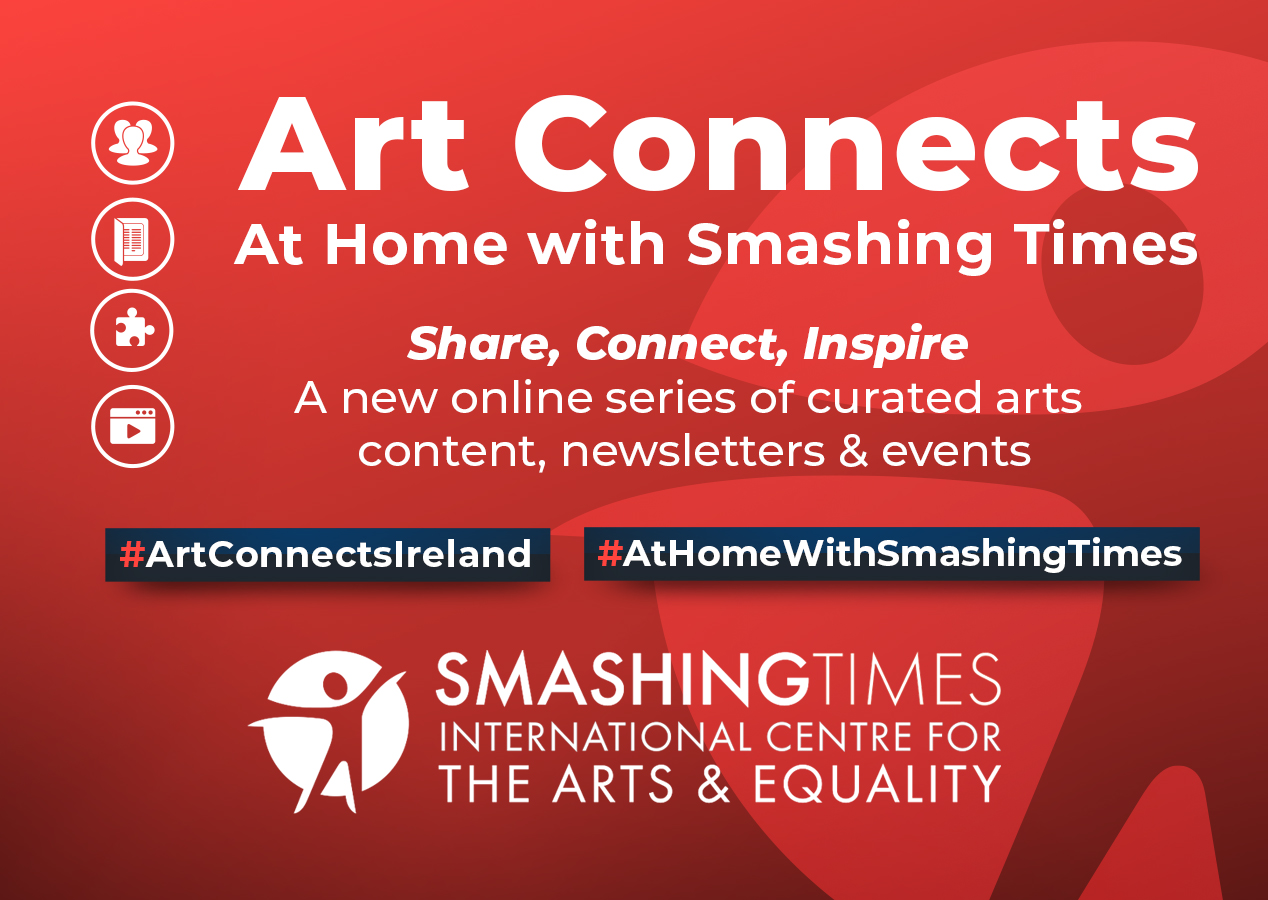 Click here and scroll down to join live event

Theme: Women’s Stories of WWII with a focus on inspiring stories of women handling adversity in difficult times in the past and today.

Special Guest Artists and Speakers: Clodagh Finn, author of A Time to Risk All, the incredible untold story of Mary Elmes, the Irish woman who saved children from Nazi concentration camps and Through Her Eyes: A New History of Ireland in 21 Women. Mary Moynihan, writer, theatre and film-maker and Artistic Director, Smashing Times International Centre for the Arts and Equality.

This online event is the International Premiere of Tell Them Our Names, an imagined re-creation of moments from the lives of five powerful women during WWII recalling moments of bravery, sacrifice and love amidst the horror of war, as women stood up against Fascism and totalitarianism and refused to accept oppression. Tell Them Our Names is directed by Mary Moynihan and created by Smashing Times Theatre and Film Company and High Wire Ltd, and was selected for the Kerry Film Festival and London Eye International Film Festival.

Join us for an online film screening – the film is 16 minutes – followed by a post-screening forum discussion on the theme of ‘inspiring stories of women handling adversity in difficult times in the past and today’. Guest speakers are Mary Moynihan, theatre and film-maker and Artistic Director, Smashing Times, and writer and journalist Clodagh Finn, author of A Time to Risk All, the incredible untold story of Mary Elmes, the Irish woman who saved children from Nazi concentration camps. Clodagh’s latest book is Through Her Eyes: A New History of Ireland in 21 Women. Told through the prism of the lives of 21 extraordinary women, this remarkable book offers an alternative vision of Irish history – one that puts the spotlight on women whose contributions have been forgotten or overlooked.

Join us at 7.30pm on Friday 3rd April. Tweet in your questions and comments to @smashing_times or email them to productions@smashingtimes.ie Click here and scroll down to join live event.

Theme: Film clips inspired by a creative response to mental health with an online forum discussion on how to maintain positive mental health and well-being and tips for handling stress and anxiety.

Special Guest Artists and Speakers: Eimear Burke, counselling psychotherapist talking about positive mental health and well-being and Larissa Manley, arts facilitator and coordinator for Acting for the Future and Youth Development Officer with the Smashing Times Youth Arts Ensemble, who will bring you through a guided meditation and talk about the Acting for the Future project.

Join us for a screening of short extracts from the short film The Big No and extracts from the play of Testimonies followed by a talk and exercise demonstrations with Eimear Burke, counselling psychotherapist and Larissa Manley, arts facilitator and coordinator for Acting for the Future and Youth Development Officer with the Smashing Times Youth Arts Ensemble. Eimear will talk about positive mental health and well-being and tips for handling stress and anxiety in difficult times and both Eimear and Larissa will talk about the ongoing work of Acting for the Future with diverse communities and demonstrated some simple exercises including a guided meditation.

Join at 7.30pm on Friday 10th April. Tweet in your questions and comments to @smashing_times

Theme: Our theme is a celebration of human rights

Smashing Times International Centre for the Arts and Equality is committed to promoting creative arts practice and research in support of rights and values for all citizens equally across the globe and in support of human rights and fundamental freedoms for all. We are delighted to work with theatre and performing artists Raymond Keane and Geraldine McAlinden and singer and songwriter Farah Elle as they explore work by artists who stood up against Fascism in the past and today.

What we need from you:

Contact us online and tell us who your equality, diversity and human rights hero is?

Contact us online and tell us about your favourite artist or arts project for human rights?

As part of our ongoing work to promote the arts for human rights, Smashing Times and Front Line Defenders in partnership with a range of organisations will implement the 2020 Dublin Arts and Human Rights Festival to showcase and highlight the extraordinary work of human rights defenders in Ireland and around the world, past and present, and the role of the arts and artists in promoting human rights today. The festival will hopefully run for ten days from Friday 16 October to Sunday 25 October 2020 at a range of venues including the Samuel Beckett Theatre, Science Gallery Dublin, and dlr Mill Theatre Dundrum.

The theme of this year’s festival is Voices of Hope, Courage and Resilience celebrating human rights and linking the arts to civil society, active citizenship and politics through a series of inter-disciplinary performances, film screenings, music, dance, visual art, poetry, literature, historical memory and arts-based workshops, featuring Irish and international artists and guest speakers and panel discussions celebrating and promoting dignity and respect for all people equally.

Join us at 7.30pm on Friday 17th April. Tweet in your questions and comments to @smashing_times

At Home on Tuesdays

Every Tuesday we will send out our Smashing Times At Home Newsletter – a weekly newsletter with inspiring ideas, suggestions and chats along with news from Smashing Times, and a weekly blog on a particular topic that we will talk about each week. Our first Smashing Times At Home newsletter goes out on Tuesday 7 April and our topic is ‘love’. Please send in topics that you would like to hear us blog and chat about related to themes of the arts, equality and human rights.

At Home on Fridays

Every Friday in April we are showing an online creative arts showcases made up of film and theatre work screened online with post-show forum discussions and debates with guest speakers. Please join us to contribute comments and questions from our supporters in Ireland and across the world. Further information below.

Tell Them Our Names, a film by Mary Moynihan

Opening on an anonymous beach in Europe, a group of women and children line up in front of a bureaucrat’s desk, only to be barked at by a gatekeeper. But the women are not silent. They are here for a reason. An unexpected act of violence is carried out, as the women become authors of their own stories. Tell Them Our Namesis an imagined re-creation of moments from the lives of five powerful women during WWII recalling moments of bravery, sacrifice and love amidst the horror of war, as women stood up against Fascism and totalitarianism and refused to accept oppression.

The film is scripted by Paul Kennedy, Mary Moynihan and Fiona Bawn Thompson from a devising process with the cast, the editor is Mark Quinn, the Lighting Camera people are Ken O’Mahony and Matt Kirrane, and the film is produced by Smashing Times Theatre and Film Company in association with High Wire Ltd.

When Irish journalist and writer Clodagh Finn saw a performance of The Woman is Present: Women’s Stories of WWII presented by Smashing Times Theatre and Film Company in 2016, she was so moved by the evocative portrayal of Mary Elmes that she set about piecing together the real-life story of how this courageous Cork woman saved hundreds of lives in Franco’s Spain and Nazi-occupied France.

Clodagh trawled archives in Paris, London and the US and managed to track down several of the refugees that Mary saved as children. She tells the story in a biography, A Time to Risk All, the incredible untold story of Mary Elmes, the Irish woman who saved children from Nazi Concentration Camps, now published by Gill Books. According to a press release to accompany the book:

Mary Elmes might not be a name that many people know, but in A Time to Risk All the extent of the momentous work that she did is brought to light. Elmes was born in Cork at the beginning of the 20th Century and travelled to Europe in the 1930s to help war-torn refugees. In 1942, when it became evident that Jews were being deported to their death, she risked her life smuggling children to safety in the boot of her car and succeeded in getting a number of adults off convoys bound for Nazi death camps. She was arrested and imprisoned by the Gestapo on suspicion of espionage and hostility against Germany. But when the war was over, she married and settled down, never speaking about what she had done. Her story was forgotten.

Clodagh Finn has travelled throughout Europe and Ireland to piece together the story of this brave, unknown Irish woman, meeting with many of those Mary Elmes saved as children. Here, in a book packed with courage, heroism, adventure and tragedy, her story finally comes to light and she is remembered as she deserves

A Time to Risk All by Clodagh Finn

A Time to Risk All was published by Gill Books on 13 October 2017 and launched on 18 October 2017 at Hodges Figgis, Dublin, attended by members of the Elmes family as well as people who were saved by Mary Elmes. For further information please contact Ellen Monnelly, Publicity Executive, emonnelly@gill.ie. Tel: 01 500 9506. Tel: 086 838 9611.

Clodagh Finn has been writing and editing for over 25 years. She spent 10 years at the Irish Examiner before studying at the European School of Journalism in Paris and working there as a freelance writer and editor. She later worked for the Sunday Independent and Irish Independent for 13 years, most recently as production editor of Weekend Magazine. She currently works as a freelance feature writer, editor and trainer, and writes a weekly column for the Irish Examiner. Her 2017 book, A Time to Risk All, details the incredible untold story of Mary Elmes, the Irish woman who saved children from Nazi Concentration Camps. It received critical acclaim and was a bestseller in Ireland.

Mary Moynihan, MA, is a writer, theatre and film-maker, and Artistic Director of the Smashing Times International Centre for the Arts and Equality, using the arts to promote human rights, climate justice and gender equality. The centre incorporates Smashing Times Theatre and Film Company and Smashing Times Youth Arts Ensemble. Mary is a Theatre Lecturer at TU Dublin Conservatoire of Music and Drama. Mary specialises in professional film and theatre practice and in using the arts, new digital technologies and historical memory to promote human rights, peace, gender equality and positive mental health and well-being. Mary develops cutting edge, arts-based programmes with a range of organisations at local, national and international levels and her work is underpinned by a rights-based approach and a commitment to artistic excellence and social engagement.

Disclaimer: Some of the sources may contain triggering material.

Statement of Support During the COVID-19 (Coronavirus) Pandemic

Smashing Times International Centre for the Arts and Equality is dedicated to supporting our followers, members, partners, and wider society through the present COVID-19 pandemic. We are confident that we will overcome the current difficulties, draw strength from one another, continue to provide protection for the most vulnerable in society, and advance our goal of a world that is fair, equal, and just.

It is of the utmost importance that everyone plays their part in preventing the spread of the COVID-19 virus. Social distancing, self-isolation, cocooning, and thorough, regular handwashing are our best options. We encourage you to visit the HSE’s Coronavirus information pages, which includes comprehensive preventative actions we all can take. Also, you can view the Department of Health’s information pages here. For useful videos, a list of symptoms, posters and graphics, and further detailed information, also compiled by the Department of Health, click here.

During this public health crisis, it is also extremely essential to look after your wellbeing. Listed in the graphic below are five ways to mind your wellbeing during tough times, kindly provided by Mental Health Ireland.