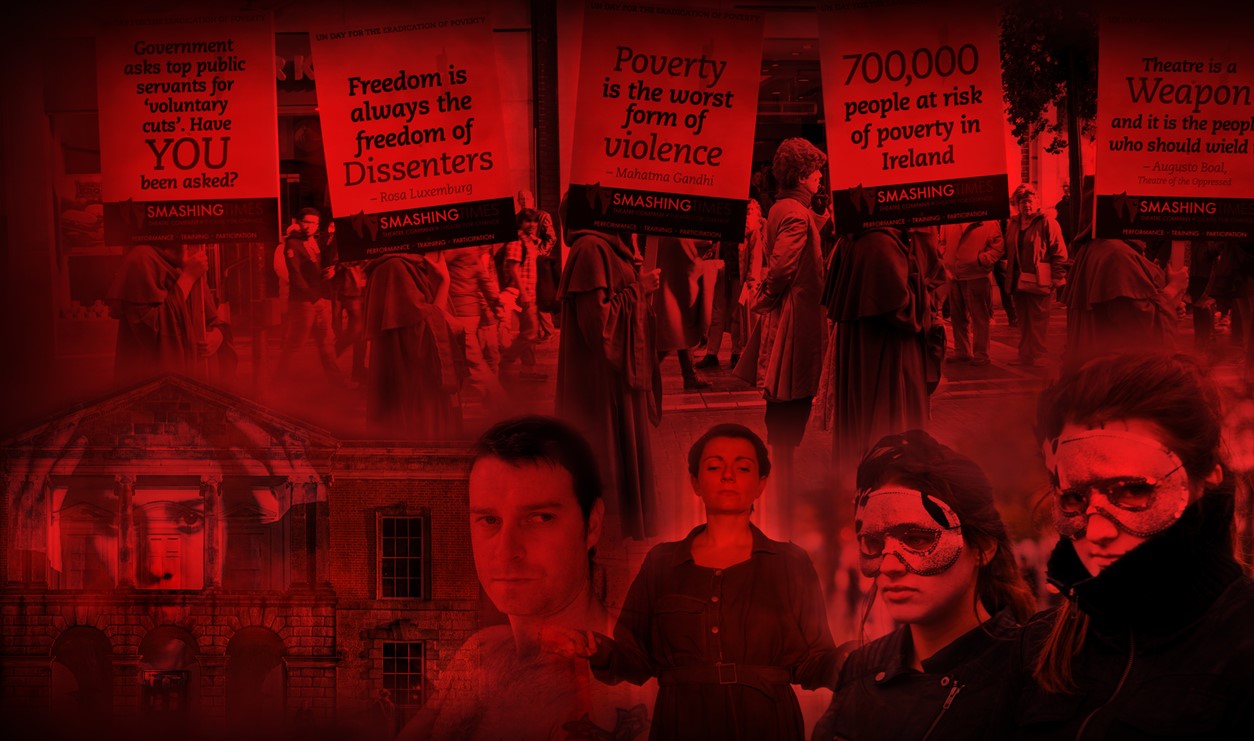 Smashing Times International Centre for the Arts and Equality, in conjunction with the Imagine Belfast Festival of Ideas and Politics are delighted to present an online panel discussion on the role of the arts to promote human rights, to support the telling of different stories and to build connections between diverse communities.  Creative Voices for Diverse Narratives panel discussion takes place online on Monday 22 March 2021 at 7pm.

Join us as we bring together artists, cultural activists and communities to explore the power of the arts in social and political contexts to promote cultural expression, cultural diversity and a culture of tolerance, human rights and equality for all.

Where:  Online via Zoom

The panel discussion is online and runs for 60 minutes. Suitable for ages 18 and up.

Creative Connections is a cultural, arts-based project using creative processes of theatre, film and new digital technologies to promote reconciliation and positive community relations between people and traditions in Northern Ireland.  The aim is to use innovative artistic approaches, discussion and debate to promote positive community relations and reconciliation through education, dialogue and culture.  Smashing Times are working with a range of diverse groups to explore a legacy of the past and discuss ways to promote tolerance and respect for different cultures into the future.  The work will bring communities together by engaging participants in a creative journey to explore diversity of thought and action, building on ways to build deeper connections in society.

Creative Connections is implemented by Smashing Times in partnership with CAIN (Conflict Archive on the Internet) and the University of Ulster INCORE International Conflict Research Institute. The work is supported by the Northern Ireland Executive’s T:BUC Strategy through the Central Good Relations Fund  and is conducted with a range of communities  including Clann Eireann GAC and South Shore Health and Well-being outreach Project, Ballybeen Women’s Centre, Old Warren Association and the UDR Association, Portadown.

Mary Moynihan is an award-winning writer, director, theatre and film-maker, Artistic Director of Smashing Times International Centre for the Arts and Equality, and a Theatre Lecturer at the TU Dublin Conservatoire. As Artistic Director of Smashing Times, Mary specialises in using interdisciplinary arts practice to promote human rights, peace building, gender equality and positive mental health, developing cutting edge arts-based projects with a range of organisations in Ireland, Northern Ireland and across Europe.

Award-winning projects include Acting for the Future, which uses theatre to promote positive mental health and well-being, run in partnership with the Samaritans, and the highly successful Women War and Peace, using theatre and film to promote equality and peace. As playwright, Mary’s work includes the highly acclaimed The Woman is Present: Women’s Stories of WWII co-written with Paul Kennedy, Fiona Bawn Thompson, and Féilim James; In One Breath from the award-winning Testimonies and Constance and Her Friends, selected by President Michael D. Higgins for performance at Áras an Uachtaráin for Culture Night 2016.

Noelle Mc Alinden is a practicing artist exhibiting locally, regionally and Internationally with work in public and private collections across the UK, Europe, US and Canada. Noelle is a Creative Adviser, Curator, Arts Educationalist, a former Head of Art and Design in a Post-Primary school and Senior Lecturer for Arts at Fermanagh College of Further Education. Noelle teaches across a range of sectors including primary, post primary, university and prison sectors. She is an international Artist in Residence in University of Transylvania, Lexington Kentucky as part of The Governors School of Art. As an Arts Activist for almost 39 years Noelle has worked across statutory, voluntary, youth and community sectors. Noelle is passionate about all artforms promoting visual and performing arts , moving image, film and digital literacy.  Noelle is also passionate about the power of the arts to transform communities, support cultural tourism, economic regeneration, health and wellbeing and support for peace and Reconciliation.

Richard Edgar is an Author and Historian based in Portadown. He has a keen interest in Genealogy and is also a regular contributor to Portadown Heritage Tours.

Dave Randall is a London based musician and writer. He has toured the world playing guitar for Faithless, Dido, Sinead O’Connor and many others, and has released his own critically acclaimed albums under the name Slovo. He composes music for stage and screen and recently completed the score for the feature length documentary ‘There Is A Field’ which brings together Black Lives Matter activists and the Palestinian struggle. He is also the author of the book ‘Sound System: The Political Power of Music‘ which was described by BBC 6Music’s Mark Radcliff as “A deeply intelligent look at music and society. Though provoking, readable and clever.”

Drawing on inspiration from the late 1970’s campaign Rock Against Racism, and citing examples from his own career and work, Dave Randall will discuss the role that music can play in the fight against racism and for a better world.

Charo Lanao has extensive experience in facilitation, training and consulting as a speaker and coach in over 15 countries around the world. Her vision is a world where people have the skills and competence to value and respect each other, a world which is full of empathy and solidarity.